Once In A Lifetime

Every now and then, a story touches your heart deeply. This one touched mine, and I hope it touches yours, too.

One day while at work, a coworker found a box of pictures in the parking lot. He put the box in an area where most lost items are placed, just in case someone stops by after realizing that they had misplaced something. After about a day or so, another coworker and I decided to look in the box - inside was an assortment of pictures and letters. Being the memory keeper that I am, my initial thought was whoever owned the photos could definitely use my help! 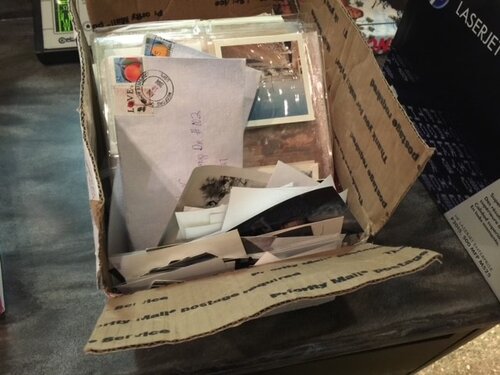 As we continued to look through the box, we discovered letters, articles, and photos (mostly vintage). We soon began to realize that this wasn’t just a box of photos, but likely a box of heartfelt memories that someone was most definitely looking for! I noticed one of the letters was sent to a Mr. Beardsley in Mesquite, Nevada. At that point, I had made a decision to do what I could to get this memento box back to its rightful owner.

After going home, I did some research on the internet on a Beardsley in Mesquite, Nevada. Surprisingly, it pulled up an obituary for Gary Beardsley. I clicked on the link to view the obituary for Mr. Beardsley & almost dropped to my knees to see that he was one of the men in the photos in the box! I really felt obligated to return these items to its rightful owner after seeing this. I called the newspaper, “Mesquite Local News”, and informed the lady on the phone that I was looking for the family members of Gary Beardsley. I let her know that I had found a box of photos and was trying to return it to its rightful owner. Amazingly enough, the employee that I was speaking with shared that she knew his wife personally and would give her a call and let her know that I needed to speak with her. By now, I was really taken aback at how this unlikely situation is unfolding. I left my name and number with the employee and waited for Mrs. Beardsley to return my call.

The next day, I got a call from Mr. Tracy Beardsley. Apparently, his mother (the wife of Gary Beardsley) connected with him and informed him that a lady in Colorado Springs was trying to get a hold of her “claiming” that she had a box of pictures in her possession. Tracy was relieved to know that his sacred box of mementos was found! These were prized possessions of Tracy. 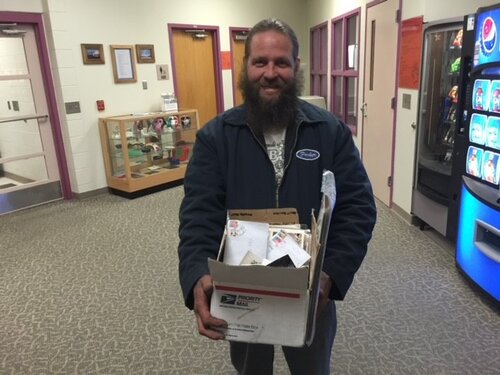 Tracy, receiving his memories back.

You see, Tracy is homeless. Currently he is living out of his car, and the day he lost his box, he happened to turn around in our parking lot. While doing so, his box of photos fell out of his car. Tracy had been a nervous wreck after noticing his possessions were lost. The two of us made arrangements for him to come back to my job so that he could get his box back. Tracy was so thankful, and quite honestly, so was I. I am grateful for getting Tracy his possessions back & meeting such a remarkable man.